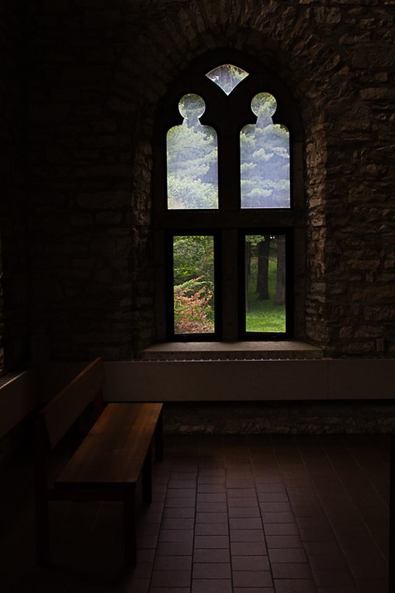 Monks have a practice called kneeling out. If one of them makes a mistake during their daily prayers, he kneels at the finish until everyone has left. For example, if the one leading the singing makes the mistake of being on the wrong Psalm and throws off their gathered prayer, then when they are done he goes to the middle of the chapel and kneels on the floor facing the chancel until everyone else has left. It's a way of saying,"I know I screwed up, and I'm sorry about it." It's a humble acknowledgment of a mistake, and it saves him from having to make apologies to everyone in the community.

I appreciate the humility of this act. It's not meant to embarrass the one who made a mistake; it's a simple way for the one who made an error to make amends, and once it's done the offense is forgotten. Most monks have kneeled out many times in their years at a monastery.

Humility is woven into monastic life. The monks own nothing of their own. They don't have money, fancy clothes, or impressive cars to drive. Many monks are accomplished persons, authors and scholars and artists with impressive resumes. You wouldn't know it, though, to see their daily life. One monk at a monastery mentioned that another in their community was one of the leading experts in the world on Gregorian Chant, but there he was in monks' choir, dressed as everyone else, not standing out beyond anyone else in their daily life. To live that life is to live humility.

Humility is not abasing oneself. Humility is to see yourself as you are. I've heard it said that humility and humiliation are different things, and I think that is right. I appreciate in others the ability to know what they are good at and to know the things they're not good at, to be able to ask for help when needed, and the ability to assert oneself and one's gifts when needed. In humility we know we're not the best or the worst persons in the world, and so there's no need to show off or to denigrate ourselves. In humility we simply see ourselves as we are.

There's a story in the saying of the Desert Fathers (early monastics living in the desert during the early centuries of the church) of Abba Moses. A brother in the community in Scetis had committed a fault, and Abba Moses was invited to the council to decide how to handle this brother. Moses didn't go. He was invited again, being told everyone was waiting. He brought along a jug filled with water that leaked. When Abba Moses arrived at the council he was asked about his leaking jug, and he said, "My sins run out behind me, and I do not see them, and today I am coming to judge the error of another." When he said this they said no more but forgave the brother. I hope I can live with that same humility and the compassion that goes with it.

These five things: hospitality, celebration, creativity, stability, and humility were things I noticed in this summer of learning. I hope I not only notice them but live them, too. This marks a turning point with this blog, too. I started writing here as a way of sharing what I experienced in my sabbatical summer. It's been a gift to me when many of you have told me you've been reading this. I'm thankful to you, dear readers, that you've followed along with this amazing summer I had. I'm going to change gears here, though, and start writing on the Rule of St. Benedict. I'm going to take little parts of the Rule and use them as opportunities for reflection. If that interests you, I hope you'll keep following along.